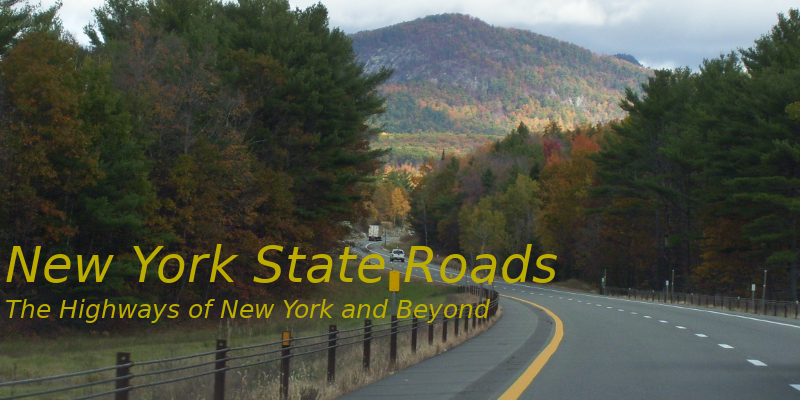 Welcome to New York State Roads! This hobby website, not owned or operated by the New York State Department of Transportation or other governmental organization, is about the roads and highways of New York state. On this site is an introduction to New York's roads, exit lists of the freeways (from the interstates to short connectors), articles on specific topics (including but not limited to planned or former freeways, the I-86 upgrade, and how reference markers work), and links to other sites. This site also has a photo gallery documenting the highways of New York, adjacent jurisdictions, and beyond. You can follow updates for the site by subscribing via RSS or liking the site on Facebook. This site is a part of the "roadgeek" community centered on the AARoads forum and many Facebook groups as well as other websites (some of which are on the links page). The roadgeek community includes people who are interested in "clinching" highways, the history, signage and other traffic control devices, and many roadgeeks even track what highways they've been on and what counties they've visited. Roadgeeks often meet up at "roadmeets", which typically start with lunch and then include a group tour of the local area, although variations of the format exist.

New York is a diverse state with a lot of different roads. It stretches from Pennsylvania to New England and Canada and is bordered by Pennsylvania, New Jersey, Rhode Island (in the Long Island Sound; no roads cross this border but a passenger ferry does), Connecticut, Massachusetts, Vermont, Québec, and Ontario. The terrain ranges from New York City to farmland, the Great Lakes, and mountains (including the Adirondacks, Catskills, and Palisades). The major metro areas of the state are New York City, Buffalo/Niagara Falls, Rochester, the Capital District, and Syracuse; other distinct regions include the Southern Tier and the North Country.