New York State had many planned freeways that did not make it to completion, most of which had since been cancelled. Some of these have visible stubs and right of way hinting at what was to be, but many exist only on maps. This page details a few of the planned freeway/expressway networks intended for the major metro areas. Note that while most of the planned corridors shown were intended to be freeways, some were only intended to be divided highways (such as Washington Avenue Extension in the Capital District).

The New York City area had many planned expressways and parkways that did not come to fruition due to community opposition and the freeway revolt. As a result, the network is only a fraction of its intended size. Evidence of the larger network abouts, such as I-78 ending just after crossing through the Holland Tunnel, NY/NJ 495, the stub endings of I-295 and the Korean War Veterans Parkway, stubs on NY 440, and even an unused interchange on I-278 in Staten Island that was only recently removed. The network is roughly shown in a map created by Vanshnookenraggen and on nycroads.com. 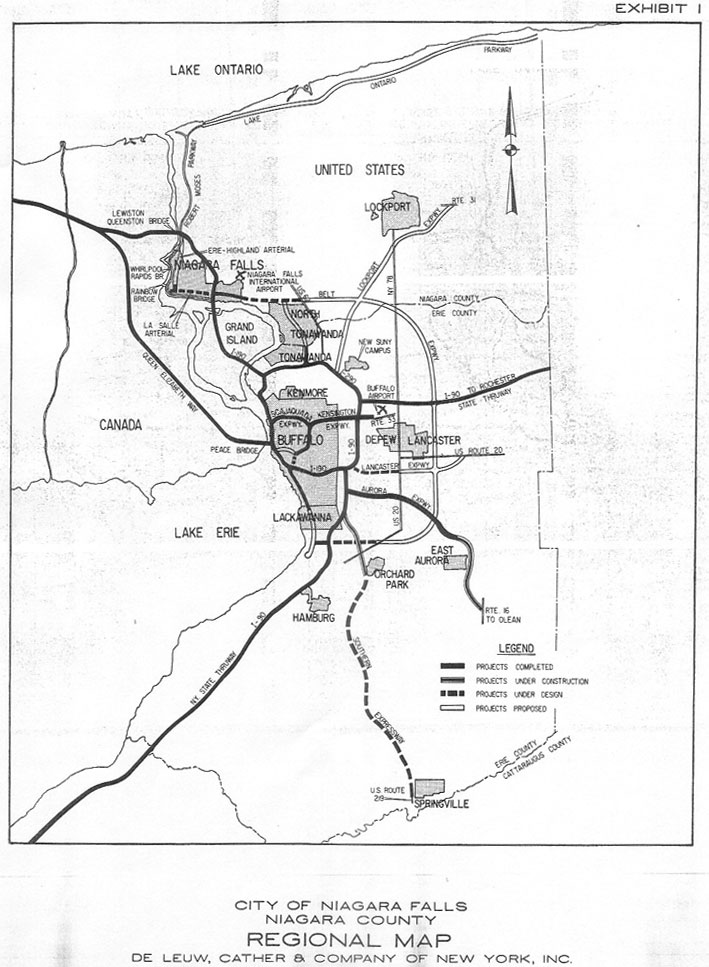 The Buffalo/Niagara Falls area had numerous cancelled expressways, the most visible of which is the stub ending of the LaSalle Expressway where it was planned to continue as the Belt Expressway (no relation to the Belt Parkway in Brooklyn and Queens). Also visible is exits 6 and 8 on I-190, which were intended to be the endpoints of the Kensington Expressway, the partial stub on I-990 where it would have continued north to Lockport, and the removed sections of the Niagara Scenic Parkway. On the map above, the only sections of proposed freeway/expressway to eventually be built are the Southern Expressway (US 219), the Aurora Expressway (NY 400), and part of the Lockport Expressway (I-990). The image above shows the existing and proposed freeway system for Buffalo/Niagara Falls in 1971, from a design report prepared by De Leuw, Cather & Company. 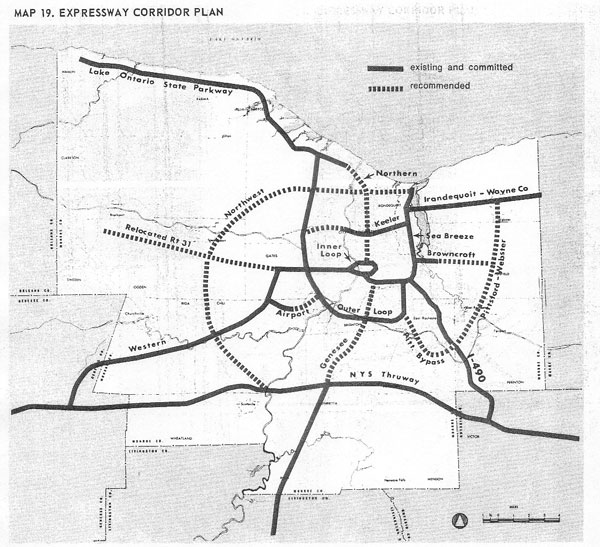 The Rochester area had a large number of cancelled corridors, the most visible of which is the extra ramp from South Avenue to I-490 east, which was intended for I-390. There is also extra right of way between I-490 and Broadway that would have been used for I-390. Additionally, the Airport Expressway (NY 204) originally had a stub ending at NY 33A before it was realigned to feed into the Wegmans corporate office. The only corridors to be built on the map above are parts of the Genesee Expressway (I-390) and Relocated Route 31 (NY 531). The image above shows the existing and recommended freeway system in Monroe County in 1969, from the Rochester Metropolitan Transportation Study 1990 Transportation Plan.

Syracuse has a smaller amount of cancelled corridors. The NY 5 freeway would have extended in both directions; on the west, it would have connected to the Auburn arterial system, and on the east, it would have bypassed Syracuse to end at I-81 at the southern city line, north of the US 11 interchange in Nedrow. There was also a plan for a freeway extending I-690 all the way to Chittenango; later, a smaller scale project for a four-lane facility to the NY 290/NY 257 intersection in Manilus Center was also evaluated. Additionally, John Glenn Boulevard would have been extended north to NY 481. West Street would have also extended east to I-81 as an arterial "inner loop".

Many planned freeways and expressways in the Capital District did not get built. The map above, created by Parsons, Brinckerhoff, Quade & Douglas for the New York State Department of Transportation, centers on Albany, showing multiple cancelled corridors around Albany. The Northway would have extended south parallel to the Thruway, running directly into I-787 at US 9W. The Mid-Crosstown Arterial would have extended south along the US 9 and US 9W corridor to I-787 and the Thruway. The South Mall Arterial would have extended in both directions; to the west, it would have ended at the Mid-Crosstown Arterial, and to the east, it would have extended to I-90 and NY 43. I-687 would have connected I-90 (from the interchange at Corporate Woods Boulevard) to the Northway and Albany International Airport, and the NY 85 freeway would have traveled south to the NY 85 and NY 85A interchange near Voorheesbille and to the north to I-687.

There were also plans to extend I-88 along the NY 7 corridor (part of which is now NY 7 between I-87 and I-787) and the NY 378 freeway northward along US 4 in Troy. Additionally, the divided highways of US 9 and NY 50 would have connected in Saratoga Springs along the railroad right of way, connecting the existing divided highways at the edges of the city.