Construction of the US 219 freeway south of Buffalo, known as the Southern Expressway, began in the early 1970s with the first segment opened to traffic in 1973. By the 1980s, it extended to Springville, with the former alignments of US 219 mostly transferred to Erie County (a part of the route became NY 391). The freeway ended at a stub interchange with NY 39, and the end remained there for a couple decades.

The freeway is proposed to extend to I-86 in Salamanca, and designated as part of "Continental 1", a proposed freeway corridor extending from Miami to Canada. Upgrade efforts are currently underway across Pennsylvania. In New York, the proposal to uprade US 219 between Springville and Salamanca resulted in an extension of the freeway south to Peters Road in 2010; the former roadway was transferred to Erie and Cattaraugus Counties. The majority of the information here, including the images, is from the US 219 Planning Study conducted by Southern Tier West. 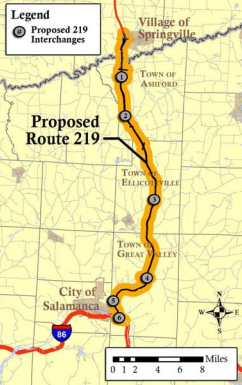 After the completion of the Peters Road extension, the project stagnated due to lack of funding, and at this point has been postponed indefinately, with poor chances of being completed. Nevertheless, efforts on the part of the local municipalities to push for the freeway's completion have continued. The current hope is to secure funding for the project's environmental impact statement and start construction from the Salamanca end, in contract to the state's approach of continuing the extensions south from the Buffalo end. 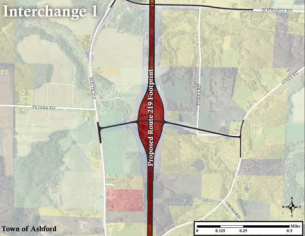 The highway currently ends at the first proposed interchange, with a stub at Peters Road in Ashford. 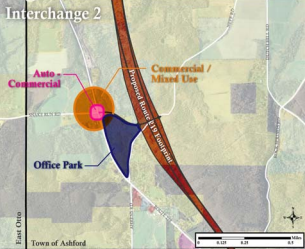 The second proposed interchange is with Snake Run Road, at the hamlet of Ashford Hollow. The next project to complete US 219 was proposed to extend the freeway from Peters Road to this interchange. 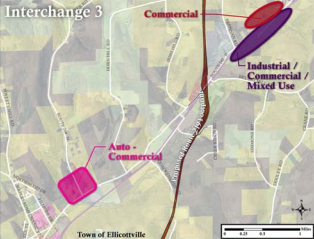 The third proposed interchange is with NY 242 three miles east of the Village of Ellicottville.

The fourth proposed interchange would serve the Town of Great Valley at a realigned Humphrey Road (Cattaraugus CR 18). 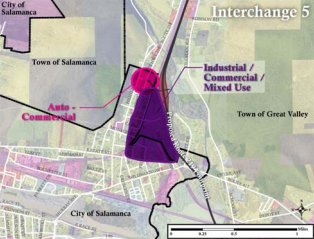 The fifth proposed interchange would build a short connector road to current US 219 at the site of a former rail yard in the vicinity of the City of Salamanca. 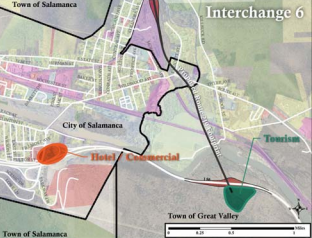 The freeway would terminate at a diamond interchange (due to a compromise with the Native Americans in the Allegany Indian Reservation) with I-86. The area south of the interchange would be used as a gateway to Allegany State Park.